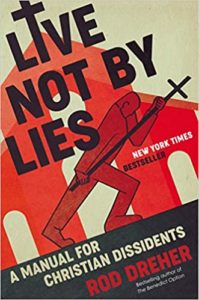 Dreher’s thesis in Live Not By Lies is that Western society, and America in particular, is sliding towards a soft totalitarianism. A totalitarian state is “one that aspires to nothing less than defining and controlling reality.” Soft totalitarianism appeals to pleasure and comfort more than threats of pain and punishment. It’s more Aldous Huxley’s Brave New World and less George Orwell’s 1984.

This soft totalitarianism, argues Dreher, will be supported by a nexus of big business (Fortune 500 companies and others), big tech – social media, and consumer habit data collection mechanisms in particular (Amazon, Facebook, Google, Microsoft), and big government. These three groups of actors will assume and advance a progressive, LBGT-affirming ideology to such an extent that the space for traditional/conservative religious expression will become vanishingly small. Think of a world filled with speech codes, a shrinking Overton window, and the blacklisting of dissenters. Think of the free speech limitations and related controversies we’ve seen in recent years at elite universities. Now imagine this “speech I don’t agree with = violence” view becoming pervasive throughout the cultural, economic, and political power centers of our country.

Think of Brendan Eich, the creator of the JavaScript programming language and the co-founder of Mozilla in 1998. In 2014, Eich was appointed the CEO of Mozilla. But news had come out that Eich had donated $1,000 to a 2008 CA grassroots effort to prohibit same-sex marriage. The effort succeeded at the ballot box: A majority of Californians in 2008 affirmed the definition of marriage as “one man, one woman.”

It’s not that Eich was accused of discriminatory behavior. No, Eich was attacked for a view that he held as a private citizen six years earlier, a view that was the majority position at that time. As per usual in these cases, Eich expressed remorse. He pledged to “work with LGBT communities and allies” at Mozilla. But it was all for naught: Eich was forced to resign after just 11 days as CEO.

Think of Memories Pizza, a family-owned business in a town of about 2000 outside South Bend, IN. In 2015 the owners were posed a hypothetical question by a journalist: Would they cater a gay wedding? Their answer was no. It quickly made national news, drawing the ire of even President Obama. Memories was forced to shutter their doors. The owners went into hiding.

Nobody was ever refused service at Memories Pizza. Moreover, the owners made clear that anyone was welcome in their restaurant — that they would not, in the future, refuse service to a gay man or woman. That wasn’t enough. Because they would not cater a gay wedding (something nobody had ever actually asked them to do), they had to not only close, but hide in fear.

We Lost the Culture Wars

With examples like these, Dreher argues that the culture wars regarding marriage and LBGT issues has been lost. (Dreher doesn’t even mention Bostock vs. Clayton, which would support his thesis.) Traditional conservatives are not only in the minority, but they’re increasingly regarded as extreme, retrograde, and a hindrance to cultural progress and the establishment of a tolerant society.

Having lost the culture wars, what can we expect from the victors? Dreher’s answer, effectively, is that we will increasingly be silenced, pushed to the margins of society. It’s an argument he introduced in The Benedict Option. The sequel’s message is this: We must “live not by lies.” We have to live in a world of lies, but we must not allow that world to live in us. Instead, we must bear faithful witness to the truth. accepting any suffering that may come in the path of obedience. Our Christian faith must be deep and genuine. It’s not enough to admire Jesus. We must love and imitate Him, following in His footsteps. Superficial Christians will wither in the face of what’s coming.

Dreher spent a lot of time talking about suffering well, drawing lessons from dissidents in the former Soviet states, and how they held fast in the face of intense persecution. How they formed tight-knit communities, strengthening one another, and serving as a beacon for outsiders seeking deeper purpose and meaning in their lives. Dreher discusses the importance of faith and family in resisting the pull of soft totalitarianism. (Note that while Dreher is an Orthodox Christian, he draws examples from Protestant, Catholic, and Orthodox Christians. He makes statements about relics and icons that I can’t support.)

How To See Soft Totalitarianism Coming

Dreher assumes the culture wars have been lost. He doesn’t so much prove this point. Of course, many would agree with Dreher. But others find such resignation to be needlessly pessimistic. For example, look where we are on the abortion issue. Millennials and Gen Z are increasingly pro-life. Or the most recent election. Progressive ideology was beat back decisively at the ballot box, even in left-leaning places like California. Sure, the LBGT movement is now ascendant, but if there’s an overreach, might we be due for a correction? Dreher doesn’t engage this possibility.

Dreher really drilled home the importance of suffering well as Christians. I appreciated his critique of the permissive, sentimental, unwilling-to-suffer-for-truth Christianity so common in our day. But he seemed to spend less time convincing readers that they will, in the future, be suffering. If you’ve been blacklisted, or know someone like Brendan Eich, you don’t need more convincing. But I think Dreher’s book would have a wider appeal among Americans if he had more slowly and carefully made his case that LBGT-affirming progressives are so narrow-minded and bigoted towards those who don’t accept their dogmas that they will soon cast them out of society. Dreher may be right. This may be coming. But I’m not sure this view is obvious to all. For one thing, Dreher’s book is published by a mainstream, non-religious publisher.

Live Not By Lies is an important and well-written book. Many would benefit from its timely insights. 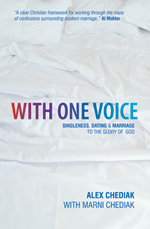